Belur is a famous tourist destination of Hassan district, Karnataka. The town is of major historical importance ever since historians considered this place as an early capital of Hoysala Empire. It is around 223kms from Bangalore, 149kms from Mysore and is located on the banks of river Yagachi. As per ancient scriptures, Belur was referred to as “Velapuri”. It is religiously known as the “Dakshina Varanasi”, as it houses some marvelous temple complexes listed under UNESCO World Heritage sites. 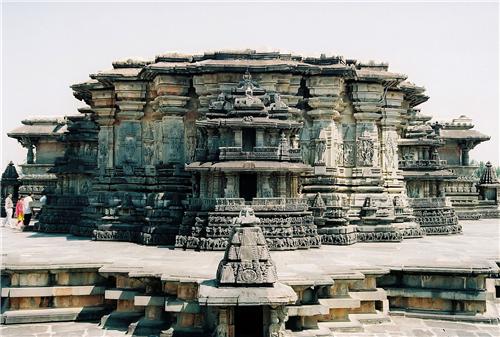 The main entrance to the temple complex is covered by a Rayagopura, built in the Vijayanagar style. The temple is of a star-shaped structure and is built up of black chloritic schist (soft soapstone), helping in the intricate carvings on the wall. The temple is a homogeneous architectural display, built on an elevated platform or jagati. The main Shrine of the temple is of 10.5m by 10.5m and is connected to the Mandapa by a vestibule. The Mandapa is of 60 compartments and is covered atop by the Sikhara. The shiny black stone zigzag walls give the Garbagriha a galactic look.

The ornate pillars has figures of 24 forms of Lord Vishnu and in spite of darkness inside the temple, all these carvings are so exquisitely done that they tend to shine like metal. Inside the shrine, there is a life size image of Keshava or Vishnu with four hands, each associated to an attribute; the discus (chakra), the mace (gadha), the lotus-flower (padma) and the conch (Shanka), in clockwise direction. Guarding the entrance is the life size sculptures of door guardians (dvarapalaka).

There are beautifully carved forty eight hall pillars, each bearing the figurine of a Madanika ( celestal damsel). They are depicted in various forms, such as dancers, musicians and drummers. Few of these carved figurines namely, Darpana Sundari, The Lady with the Parrot, The Huntress and Bhasma Mohini are popular among the tourist guides. The bottom of the outer walls of the temple is ornamented with six hundred and fifty statues of aggressive elephants, symbolizing strength. Above these are statues of lions, symbolizing courage, and on top of that are horses symbolizing speed. Above the horses are panels with floral designs signifying beauty.

The temple shows the impeccable craftsmanship of the father-son duo, Jakanachari and Dankanachari hailing from Balliganve, a centre of Kalyana Chalukya art in Shimoga district. As per art critic Gerard Foekema, this Mandapa can be coined as the most magnificent medieval architecture.

Just about 3kms from Belur, one can view one of the biggest reservoirs of Hassan district, Yagachi Dam. This dam is built across river Yagachi, a tributary of river Kaveri.  Constructed in 2001, this dam is helping the agrarian community of Hassan with adequate water supply to support irrigation. The reservoir here quenches the thirst of many in the district by supplying safe drinking water.

The Dam attracts tourists from all around the State and outside, with its natural lush green beauty and cool weather. One can escape the hustle and bustle of the city and enjoy a weekend gateway over here. To promote the place, the State government has arranged for various adventure water sports here. Tourists, who are not that keen in visiting heritage places in Belur, can enjoy Jet Ski, Speed Boat Ride, Banana Boat, Bumper Ride, Kayaking, Cruise Boat ride.

Modes of Travelling to Belur

Travelling to Belur has become very convenient because of the ever increasing tourism industry. For the ease of access, the town has been well connected with all the major Karnataka cities by various modes of transport. Best time to visit the town is between October to February. Kannada is the widely spoken language, but English is well understood by the localities due to frequent foreign tourists.