One of the 30 districts of Karnataka, Hassan is located about 194kms from the state capital Bangalore. Mesmerizing Hoysala art and architecture scattered across the district in the form of beautiful temples, welcomes all visitors with unmatchable splendor. Jainism as a religion has a great influence on the history of the district. A visit to Sravanabelagola is a must, in order to get a glimpse of the Jain art and culture. Every year, Hassan district administration celebrates the famous Jain religious occasions Mahamastakabhisheka, even long after Jainism has ceased to be the dominantly practiced religion.

Hassan district’s bygone culture was historically dominated by the Hoysala and Ganga Dynasty. The Gangas, who were Hindus by religion, initially ruled as a sovereign power from 350-550 CE. But by the time of King Shivamara II 785 CE, Jainism became the main religion. The Hoysalas, followers of Jainism, came to rule the district of Hassan after defeating the Ganga dynasty in 1000-1334CE. During the rule of King Vishnuvardhana, Ramanujacharya (the famous Tamil brahmin theologian, philosopher, and scriptural exegete) created a major influence, resulting into the king converting to Hinduism. However during his rule, the Channigraya Jain temple was built, bringing evidence of different religious tolerance by the people of Hassan from ancient times. Muslims constitute 5% of the total population of the district. 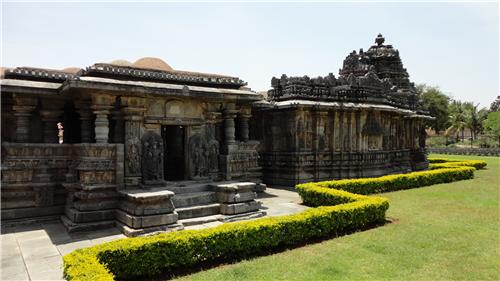 Present Hassan citizens are mostly of agrarian background. Although Hassan has grown over the years with good administration, healthcare facilities and education centres, but many villages of Hassan are still categorized as backward communities. Folk culture and traditions are predominant in these areas. In order to protect and revive the folk culture across different parts of the district, the Karnataka Janapada and Yakshagana Academy has started a state level workshop on folk songs.

The Hassan Zilla Samskrithika Vedike, a welfare organization, conducts workshops and cultural meets, in order to encourage the locals with the original folk traditions of the district, which has been obliterated by the new progressive era. Hassan is also called as Poor man's Ooty. Tourists can enjoy the lush green beauty of the nature in the Bisle Ghat region almost similar to the Nilgiri district of Tamil Nadu, without the commercialization.

The famous Hassan Iyengars, a Brahmin community are famous for their tasty bakery products. Their chains of shops are named as Iyengar Bakeries.

Literature is the essence of Hassan and the city has given prominent personalities like Gorur Ramaswamy Iyengar, whose notable works are namely Namma Oorina Rasikaru, Bhootayyana Maga Ayyu, Amerikadalli Goruru.

With age, Hassan has also kept a pace with the progressive outside world and has built many cultural centres. To name a few:
Though a small district, Hassan has a combination of ancient art and culture, along with a contemporary mixture of modern lifestyle.