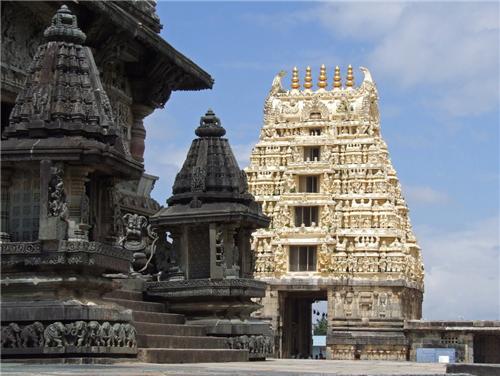 Halebeed, also known as Halebidu or Halebeedu is an old temple city of the Hassan district. This place is rich with ancient culture that every stone here tells a story. Two times destroyed by the Bahmani Sultanate, Halebeedu literally means “ruined city.” It was the majestic capital of the Hoysalas in the 12th century.
Tourists visiting this place will be amazed by the architectural engineering of the twin temples namely, Hoysaleswara and Kedareswara. The temple complex comprises of the two amazing temples and two Jain basadi. There is a lake at the entrance with two Nandi statues guarding the complex.

This temple was built by King Vishnuvardhana of the Hoysala Empire in the 12th century and is dedicated to Lord Shiva. The structure stands atop a platform or jagati, with two shrines facing each other. The temple complex looks almost similar to the Chennakesava temple, having the shining stone walls inscribed with figurines of Gods, Goddesses, animals, birds etc. The outer wall is minutely sculptured with sequences of Ramayana and Mahabharata. Visitors can see a large image of Nandi at the pavilion, guarding the shrine of Lord Shiva. The temple interior is plain with four central pillars ornately designed with figurines of Madanikas (heavenly damsels).The single Linga inside the garbagriha is worshipped as the main idol of the temple. According to the art critic Gerard Foekema, this temple architecture is the best of existing Hoysala art in Hassan district.

Built in 1319, this temple shows the marvelous Chalukyan art. This shrine is in complete ruins with only the strong black walls and broken ceiling standing. Lord Shiva in the form of black Shivalinga resides this temple along with Brahmalinga and beautiful statues of Tandaveshwara, Uma Maheshwara, Bhairava, Varaha and Janardhana.

Halebeed and Belur are considered as the “Twin Towns” of Hassan, in terms of weather and temple architecture and they are only 16kms apart. One can enjoy a Heritage tour of these two places, with excellent road connectivity. Distance from Bangalore to Halebeed and Belur by road are respectively 212kms and 222kms.

Tired travelers can enjoy some refreshments at few good roadside restaurants, namely, Aggarwal Bhawan and Mayura, which are offering both South and North Indian recipes.
Halebeed is a hot and dry region with hot summer temperature ranging above 30 degree, and it is advisable for the tourists to visit this place between October to April. Tourists can bring along cotton apparels and tons of sunscreen lotion for a summer and light woolens for winter.