Hassan district welcomes one with its lush green terrains, pleasant climate and legendary tourist spots. It has been popularly named by the tourists as “Poor Man’s Ooty”. Located around 194 kms from the state capital, Bangalore, Hassan district is famous for its rich history, and is considered a treasure-house of artifacts and sculptures of the Hoysala period of reign. Founded in the 11th Century by Chieftain Channa Krishnappa Naik, the city is named after the Goddess "Hassanamba" or “Hassan-Amma”, traditionally meaning the smiling mother or goddess. 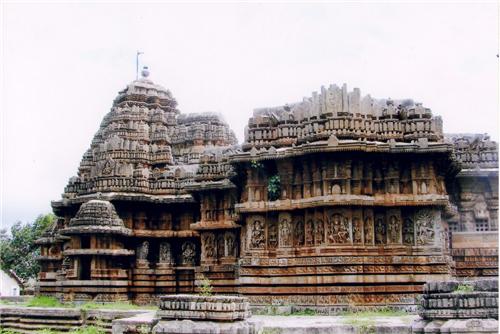 Though a small district of Karnataka, Hassan has a wide range of sightseeing options, and has gained popularity among the tourists. Few of the must see places are namely, Belur, Halebeed, Sravanabelagola, Hasanamba Temple and Gorur Dam.

Also known as Velapur, this place is famous for its exquisite temples. Belur was an early Hoysala capital and is situated 38kms from Hassan, 149kms from Mysore on the banks of the Yagachi River. The beauty of this place is attributed to the famous Chennakesava Temple, showing the finest workmanship of the Hoysala dynasty. This temple was built by the famous Hoysala king, Vishnuvardhana to celebrate his victory against the Cholas.

Halebeed or Halebidu was the erstwhile capital of Hoysalas, also known as Dwara Samudra. It is located around 16 km from Belur, 31 km from Hassan and 149 km from Mysore. One can enjoy the twin temple architecture of Hoysaleshwara and Kedareshwara, built by Vishnuvardhana and Ballala-II of the Hoysala Empire. Outer walls of the Hoysaleshwara temples are scripted with Ramayana, Mahabharatha & Bhagavatha sequences. The Kedareshwara temple, with its intricate ancient carvings, is also a treat for the eye.

Squeezed between two rocky hills, this town is the epitome of Jain art, culture, architecture and religion for two millennia. It is situated about 49kms from Hassan and 150kms northwest of Bangalore. The 18m high monolithic statue of Lord Gomateshwara which stands atop the Indragiri hill amazes one’s mind.

This shrine is the home of Hasanamba, the presiding deity of Hassan. Every year only during Diwali, this 12th Century temple opens for its devotees for a week.

How to reach: This temple is at the heart of the Hassan city and can be easily reached in an auto rickshaw. It is around two hour drive from Bangalore, thus making it a weekend gateway.

This is also known as Hemavathy Dam as it is built across river Hemavathy, a tributary of river Kaveri. Built in 1979, this place is a beautiful picnic spot and is an attraction for the bird watchers. Monsoon is the best time to visit the place. This dam is around 22kms from Hassan and 192kms from Bangalore.

How to reach: Regular KSTRC buses are available between Gorur and Hassan. One can avail train service till Hassan Railway Station and get a rented car to reach this place. One can also do a day trip from Gorur Dam to the following destinations:

One can have a delightful shopping experience in Hassan, with a wide range of options. There are lots of shops in and around the city selling varieties of sandalwood sculptures, ivory items, pure silk sarees and handloom. Tourists can buy small gift items and souvenirs like Ivory storage boxes, small but intricate sculptures of gods and goddesses. Beautiful sandalwood statues, incense sticks, decorative boxes are also available in local shops.

Outdoor Activities One Can Enjoy in Hassan

Adventure lovers can enjoy trekking along the majestic Pushpagiri Range and reach Bisle Ghat Reserve Forest to soak in the natural beauty. One can also enjoy water sports like rafting and kayaking in the Tungabhadra River.

The main festival in this district is the Hassanamba Temple Festival, which occurs every year in the month of October to honour “Hassan Amma”, the presiding deity who is believed to be the protector of the city of Hassan.

Tourism in Hassan Hassan although a small district of Karnataka, is very well connected by roads and rails from Bangalore and Mysore.