Shravanabelagola: One of the Seven Wonders of India 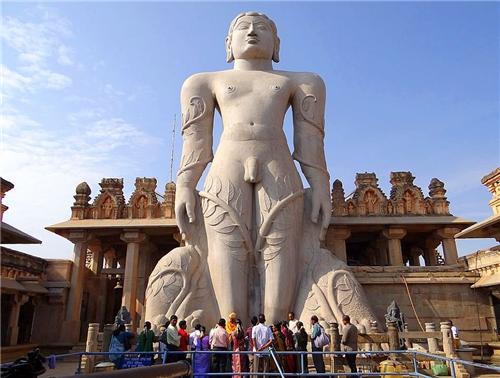 Shravanabelagola, a small town situated at around 13 kms south-east of Channarayapatna of Hassan district, is an important Jain pilgrimage. Squeezed between the two rocky hills of Vindhyagiri and Chandragiri, the small and quiet town welcomes tourists with its natural and expansive coconut plantations. Around 150 kms from Bangalore, this town had reached its pinnacle of Jain art, culture and architecture under the rule of Western Ganga Dynasty of Talakad.

The statue of Gomateshwara Bahubali, an image of Tyaga and Ahimsa, is the main attraction of the place. It is the world’s largest monolithic stone statue (57 feet tall). Tourists around the world visit this Wonder and get awe struck, while Jain pilgrims consider this place as the Southern Kashi. The town is well known among the tourists for its enchanting natural beauty and religious sanctity. The main temple is on a small hill, and one has to cross a flight of 600 stairs to reach atop. For old and disabled people government has arranged for human-carried-chairs.

The ascent is kind of breath taking both in the terms of the distance and also the amazing view. Once to the summit, the tall statue of Bahubali standing on a lotus becomes visible. Inside the temple there are 24 carvings of ancient Jain gurus. Archaeological survey has found out 800 inscriptions dating back to the early 10th century, mostly in Chandragiri . Study of these inscriptions has helped in understanding the Hassan history along with origin and development of Kannada language.

The name Shravanabelagola means "White Pond of the Shravana.”  In Kannada, Bela means “white” and Kola means “the pond”, which refer to the beautiful pond or tank in the middle of the town. Guides and residents refer this place with various names like Devara Belgola, meaning "White Pond of the God" and Gommatapuram, meaning "City of Gommata." 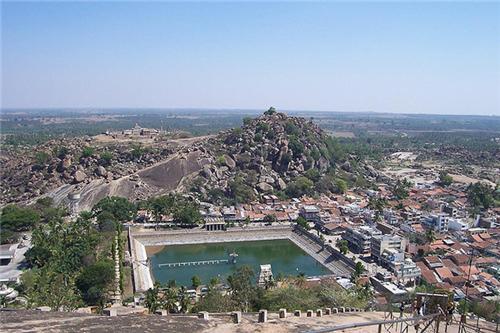 As per ancient scriptures, the first Jain named Teerthankara, had two able sons namely, Gomateshwara (also known as Bahubali) and Bharatha. Both of them were too blinded by the wealth and power of the throne. Challenged by his brother, Bahubali involved himself in a battle and emerged victorious. After winning he realized that how power corrupts and the greed of abundance has led him to fight against his own brother. He then renounced his own kingdom, gave away all earthly pleasures and stood in deep meditation.

It is also believed that around 2000 years ago, one of the earliest Jain Acharya, Bhagwan Bhadrabahu resided here with his disciples. Many historians claim that emperor Chandragupta Maurya, drawn by Bhadrabahu’s elegance became his disciple and came to this place. His tomb known as “Chandragupta Basadi” has been sacredly kept till today on the Chandragiri hill and is visited by pilgrims. 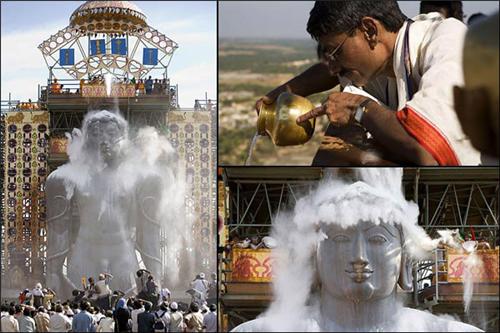 The Mahamastakabhisheka ceremony of the statue of Gomateshwara in Shravanabelagola, is an important Jain festival which occurs every twelve years. The last festival happened in 2006. This festival is observed to pay homage and respect to the great statue of Bahubali. People around the World come to see the pomp and grandeur of this occasion. Rashtriya Mahamastakabhisheka Mahotsava Samithi (RMMS) is the main organizer. A podium is created on top of the statue, and from there priests bathe Bahubali with milk, sugarcane juice, tender coconut water and saffron paste. Then powders of sandalwood, turmeric, and vermilion are poured along with valuable Gold and Silver flowers. On 2006, helicopter was arranged to shower flower on the statue of Gomateshwara. This ceremony is also referred to as “The Head Anointing Ceremony.”

Location and how to reach Shravanabelagola

The town is situated at a distance of 51 km south-east of Hassan, 78 km from Halebidu, 89 km from Belur, 83 km from Mysore and  233 km from Mangalore. The town is very well connected to all major cities of Karnataka.
One can travel by various means like:
This beautiful and quiet town is a perfect weekend gateway for tourists, who want to soak in the ancient Jain art, culture and traditions.